March of War has a large set of maps, divided over different settings and game modes. Due to the production of these maps and the progress ISOTX made with their tools, maps have to be updated and adjusted over time. 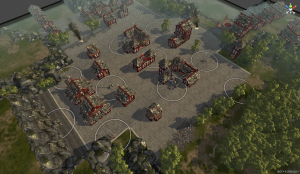 This map, known by the working title Orient was not originally made by me and was presented to me for an update on both graphics and gameplay. The map’s major criticisms were the lacklustre terrain texturing, the empty vistas and the layout of ‘a set of buildings in a field’. 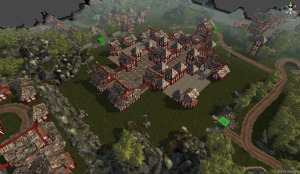 At this point, I first created a more infantry-focused centre. This gives a stronger feeling of attacking a city and it matches it reinforces the role of infantry in smaller urban settings, while vehicles remain focused on the on the outside areas. Visually, I emphasised this gameplay area with a different texture. The entrances to this area are also emphasised with red arches, pavement curbs and a change in texturing.

Secondly, I made a base setting for improving the vistas. I added a series of forests to the left on the mountain ledges. A lake was added on the other side and the top of cliff was re-purposed as an extension of the village with buildings and infrastructure. 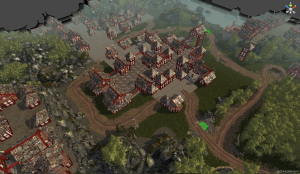 The second step is highlighting the paths towards key elements within the map. All positions where the player can start the game have roads directly leading towards key points of the map. Using these simple clues, there is quickly a strong sense of direction and order within the map.

At this point, with basic gameplay laid out and key elements highlighted, play testing commences. Testing the paths, the strategic points and the area of combat resolution against the AI and other humans is important.

In a minor change, I made sure that the top and bottom spawn-position are visually distinct. Now the player can directly see his strategic situation with one glance on his starting position. 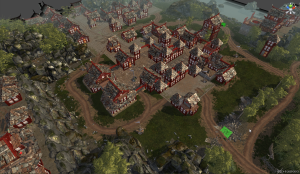 The third image shows some adjusted highlights based on feedback. Following this, there is a stronger focus on updating graphics and to give the village visually distinctive components throughout the map. 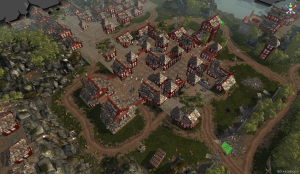 In the last step, updates are made to the graphics and the village is giving a more lived through feeling. Dirt and destruction is added. Trees and lanterns are added too as they provide a visual break. What would otherwise be a very brown and grey village is now a village which has become brown and grey by war.

The three starting positions now also feature unique narrative components. One player breaks through the wall surrounding the city, while his opponent comes from within the city or its outskirts next to the lake. 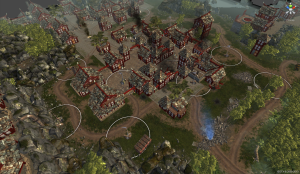 The end result, with all terrain baked and the lighting as in the game. The last editions are minor destruction props, blood smears end particle effects.